Night Lights is a magazine story.

Percy had been busy taking building supplies to an old mine where workmen were working to open it up again so that visitors can learn how miners used to work there. The opening day of the mine soon arrives and Percy takes Lady Hatt, Stephen, Bridget and the other passengers to the mine's own station. Percy watches as everyone puts on special hard hats with bright miner's lights on the front. Stephen, Bridget and Lady Hatt wave goodbye to Percy as they enter the mine with their tourguide. Stephen calls to thank Percy for the ride and tells him that the Fat Controller will be taking them home in the car.

Percy heads off to the far side of the island to deliver urgent parcels in his guard's van. Soon, it is night time and Percy's driver has to light Percy's lamps. As he clatters through the countryside, Percy sees the moon and the stars shining brightly in the sky. As he waits at a signal he sees a cat with bright eyes out exploring. Percy carries on his game of spotting things at night. An owl swoops past Percy's funnel and a fox runs up the embankment.

Percy soon passes the mine again and is puzzled to see strange lights close to the entrance. As he pulls up at the station, the lights grow closer still. Then Stephen and Bridget call out. They explain that Lady Hatt had lost her house keys in the mine and it has taken them hours to find them again. Percy watches as the Fat Controller arrives to drive his family home. Percy decides to play his game again and spots the headlights on the Fat Controller's car. 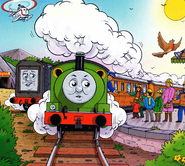 Add a photo to this gallery
Retrieved from "https://ttte.fandom.com/wiki/Night_Lights_(2004_magazine_story)?oldid=1709314"
Community content is available under CC-BY-SA unless otherwise noted.