“You're made of wood instead of smart, shiny metal!"
"You look a bit like a travelling fence!”
―Henry and Gordon teasing Toby

No Trouble for Toby/
A Sticky Situation

No Trouble for Toby, later retitled A Sticky Situation, is a magazine story.

It is a stormy night on Sodor. Toby is working at the Main Station, so the Fat Controller suggests that he stays in the Sheds with the other engines for the night. Henry and Gordon are less than kind to their new visitor, teasing him for being made of wood, so Toby is glad when morning comes. The Fat Controller is in a good mood and wants to get more people to use the railways, so he comes up with a special offer; "buy one ticket, get one free". He tries to stick posters on the engines, but they just slip off their shiny boilers. Gordon suggests a stronger glue and soon Henry is proudly puffing around the island with a poster stuck to his sides. As he roars through a level crossing, the poster flies off and sticks to Elizabeth's windscreen. Meanwhile at the Main Station, Gordon's poster flies off his boiler and into the Fat Controller. The Fat Controller concludes that the engine's boilers are too shiny to stick things to. Then Toby trundles into the station. He asks the Fat Controller to nail the posters to him and soon everyone knows about the special offer. 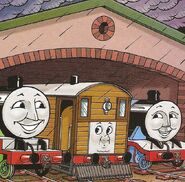 Add a photo to this gallery
Retrieved from "https://ttte.fandom.com/wiki/No_Trouble_for_Toby?oldid=916265"
*Disclosure: Some of the links above are affiliate links, meaning, at no additional cost to you, Fandom will earn a commission if you click through and make a purchase. Community content is available under CC-BY-SA unless otherwise noted.