Norramby (originally Normanby; The Bay of the Normans) is a seaside town on the southeastern coast of Sodor.

Norramby's name originates from its status at the site of first Norman invasion of Sodor in 1089. It was rerouted by Godred Crovan into a pass leading to Sodor's interior (that pass is now called Crovan's Gate), where the Normans were ambushed by Sudrian reinforcements. The Normans then retreated to the bay where they had landed, only to discover that their ships had been set alight or captured by another party of Sudrians.

The Church here is one of two on the island dedicated to the 7th century missionary of the Iona School, St. Finan. Its possible he landed here on his way to Northumbria to be appointed Bishop of Lindesfarne.[1]

Norramby is now an attractive sea-side residential town with safe, sandy beaches and is a popular holiday resort for Sudrians and Mainlanders alike.[2] The North Western Railway's Norramby Branch Line serves the town, and has run an hourly suburban service between here and Barrow-in-Furness jointly with the LMS/BR since 1925.

The Dukes of Sodor are all from the Norramby family, which takes its name from the town.

In the television series, Norramby station was introduced in the eighth series. The main structure of the station is mainly wood. Originally, there was a set of buffers on the track nearest to the beach, but since the ninth series, the buffers have been removed and the track has been extended. Neptune Refreshments has a stall here.

This station is one of two railway stations in the town of Norramby, the other being Norramby Church Station, which serves St. Finan's Church, roughly in the centre of the town. On the town's western edge is the Norramby Fishing Village. 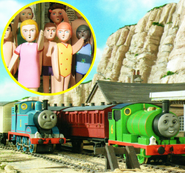 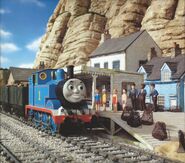 Normandy, the inspiration for the name
Add a photo to this gallery

North Western Railway
* RWS only | ** T&F only | --- Dropped
Norramby Branch Line
* RWS only | ** T&F only
Retrieved from "https://ttte.fandom.com/wiki/Norramby?oldid=1753984"
*Disclosure: Some of the links above are affiliate links, meaning, at no additional cost to you, Fandom will earn a commission if you click through and make a purchase. Community content is available under CC-BY-SA unless otherwise noted.