Northern Rock is a minimum gauge steam tender engine working on the Ravenglass and Eskdale Railway.

After undertaking trials with the Romney, Hythe & Dymchurch Railway no. 2, Northern Chief in 1972, the railway company decided to construct a new 2-6-2 locomotive, originally to be named Sir Arthur Heywood. The railway received funding from the Northern Rock building society and so the locomotive was named after her chief sponsor. She entered traffic in 1976 and has visited many railways, as far away as Dresden, Germany, to publicise the railway. The design created a considerable amount of interest; two similar locomotives have been built at Ravenglass for the Shuzenji Romney Railway in Japan, Northern Rock II and Cumbria, in 1989 and 1992, respectively.

Jock is based on her, with added round buffers and a six wheel tender instead of eight.

Northern Rock was mentioned in The Island of Sodor: Its People, History and Railways.

She also appeared in a Mr. Perkins' Railways segment about the different gauges of tracks. 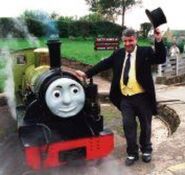 With the Fat Controller

"Cumbria" undergoing testing on the Ravenglass and Eskdale Railway after construction
Add a photo to this gallery
United Kingdom
* RWS only | ** T&F only
Retrieved from "https://ttte.fandom.com/wiki/Northern_Rock?oldid=1767359"
*Disclosure: Some of the links above are affiliate links, meaning, at no additional cost to you, Fandom will earn a commission if you click through and make a purchase. Community content is available under CC-BY-SA unless otherwise noted.