Old Bailey is a fogman and is also the current stationmaster of the Hawin Lake station.

When Henry tried to take a goods train by Hawin Lake, he saw a light flickering from the station, a mysterious amber signal, and a discarded coat hung on a tree, which made him turn back in fear of ghosts. The next day, he tried to take the same train down the route, but the trucks became scared by the light and pulled Henry forwards, hurtling themselves into a ravine. Immediately, Old Bailey showed up and scolded Henry's crew for ignoring his warnings. To make reparations, the crew and Sir Topham Hatt renovated Old Bailey's station and made him the stationmaster.

In hindsight, Old Bailey can be the "mysterious figure" but he's actually a very well-mannered person and while he comes across as blunt, it's only for the sake of keeping the North Western Railway safe during strong periods of fog. Aside from his dedication as a fogman, Old Bailey takes great pride as the Stationmaster of Hawin Lake without fuss.

When looking out for fog, Old Bailey wears a yellow shirt, a brown coat, a brown fedora and grey trousers.

As a stationmaster, Old Bailey wears a uniform consisting of blue trousers, a black tie, a white shirt with a blue overcoat, and a blue cap, with a brass plate on the front.

Old Bailey on the Pump Trolley

Old Bailey in his stationmaster uniform 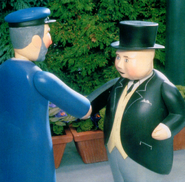 ERTL promo art
Add a photo to this gallery 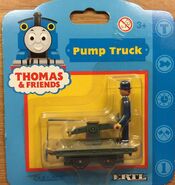 ERTL Packaging
Add a photo to this gallery
Peel Godred Branch Line
* RWS only | ** T&F only
North Western Railway
* RWS only | ** T&F only | --- Dropped
Retrieved from "https://ttte.fandom.com/wiki/Old_Bailey?oldid=1771888"
*Disclosure: Some of the links above are affiliate links, meaning, at no additional cost to you, Fandom will earn a commission if you click through and make a purchase. Community content is available under CC-BY-SA unless otherwise noted.