Old Square Wheels is the third story in the 1990 Annual.

After having a bad time on his first day on Sodor, Diesel vows revenge on Duck for making the trucks laugh at him. One day, Henry's trucks push him down the hill. But as soon as the brakes are applied, his wheels lock and he slides down the hill until finally coming to stop at the junction. Later, his driver discovers that Henry's driving wheels have become flat like car tyres from the sliding. When Diesel hears this, he is delighted and starts to make a plan to pay Duck out. 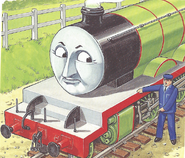