The Old Stone Bridge is a small bridge made out of stone located near a large forest.

The bridge first appeared in the fifth series episode, Haunted Henry. In Busy Going Backwards, some workmen were working on the bridge when they were warned of Toad and his runaway trucks. They diverted the runaway train onto an old siding beside the bridge, causing it to crash into muddy water that had pooled in the middle of the siding. In an eighth series learning segment, the bridge was revealed to have rails running above it.

Henry underneath the bridge

Stepney underneath the bridge

The bridge being repaired

The pool of muddy water beside the bridge

Toad in the pond

The bridge in the sixth series 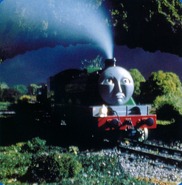 Add a photo to this gallery
Retrieved from "https://ttte.fandom.com/wiki/Old_Stone_Bridge?oldid=1708022"
Community content is available under CC-BY-SA unless otherwise noted.