Oliver is a fictional standard gauge tank locomotive created by the Rev. W. Awdry. Oliver lives and works on the North Western Railway. He carries the number 1436.

He first appeared in the Railway Series book, Enterprising Engines, which was published in 1968. His last appearance was in Wilbert the Forest Engine, published in 1994.

Oliver is based on Great Western Railway 14xx Class 0-4-2T.

Oliver is named after Oliver Wicks, who was a much respected member of Stroud Baptist Church. He was the Rev. W. Awdry's next door neighbour in Rodborough, Stroud. Oliver's name may have also been inspired by Bulliver, a member of his class preserved on the Dart Valley (now South Devon) Railway, which is mentioned at the beginning of Oliver the Western Engine.

In 1992, Oliver was introduced in the third series of Thomas the Tank Engine & Friends, reprising many of his roles from the Railway Series. Unlike the Railway Series where his number was 1436, he was given the number 11.

Since his introduction, Oliver appeared as a supporting character up until the seventh series. As a result of the stories from the eighth to sixteenth series focusing primarily on the Steam Team, Oliver was neglected and left absent along with many other characters from the eighth to eleventh series. He reappeared in the twelfth series, but was left absent again when the series moved from live-action model animation to Computer-Generated Imagery. Oliver eventually returned in the eighteenth series, and has made regular appearances until 2018.

Since his return in 2014, Oliver has been voiced by Joe Mills in both the British English and American English dubs of the series. Joe Mills gives Oliver a West Country accent, reflecting his basis' origins.

Oliver’s model was custom built from brass by model makers, Peter Eves and Jeremy King. It was painted in glossy car body paint while the numbers and GWR logo were custom cut vinyl stickers.

Oliver's chassis was sourced from a gauge 1 locomotive made by Märklin, the BR 78., but modfied. The buffers, coupling frame and brake pipes were made by Tenmille. The chassis' AC motor was replaced by a DC motor to allow for easier running and maintenance.

Seven different facial expressions were worn by Oliver on screen.[1] The faces were first sculpted in clay and from that resin casts were made using a silicone mould. One of Oliver's facemasks is owned by Twitter user TomsProps.

Oliver's grinning face as it appeared during The Britt Allcroft Company era... (1992-1998)

...then last appeared as a chuckling face in the seventh series (2003)

Oliver's shocked face mask that only appeared in both the fifth and seventh series. (1998, 2003)

In the episode, Oliver's Find, Oliver was seen with a lamp. This was powered by a hidden battery pack.

The twelfth series marked the beginning of the show's transition into CGI and the characters' faces were animated through CGI with the aid of motion capture animation. The physical models' molded faces were replaced by white targets with triangles to fix a computer-animated face in post-production.

Oliver has had modifications throughout the model era. These include:

Several close-up shots of Oliver's cab was required for scenes in the fifth series episode, Oliver’s Find, where he had to interact with close-up scale figures. It was also used for close-up whistle shots; smoke would emit from the whistle when required. The model was not complete and only portions of the cab were built.

In 2009, the series introduced Computer-Generated Imagery (CGI) as a replacement for the show's long-standing live-action models. In 2014, Oliver was created in CGI by Arc Productions. The model was "hand-sculpted" in Maya, a 3D animation and modelling software.

Oliver has had modifications throughout the CGI series. These include: 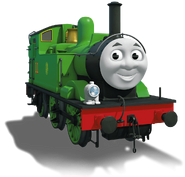 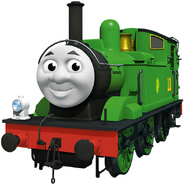 Retrieved from "https://ttte.fandom.com/wiki/Oliver/Behind_the_Scenes?oldid=1724651"
*Disclosure: Some of the links above are affiliate links, meaning, at no additional cost to you, Fandom will earn a commission if you click through and make a purchase. Community content is available under CC-BY-SA unless otherwise noted.