Oliver Gets the Bird

“Fancy being fooled by a bird, eh, Oliver? I reckon that makes us quits, don't you?”
―Duck after Oliver's run in with Cocky

Oliver Gets the Bird is the fourth story in the 1985 Annual.

Oliver is excited about the stationmaster's father's parrot, Cocky. Duck, however, is not impressed and does not believe that Cocky can talk. One day, Oliver waits for Rex's train and Oliver's driver hears a guard's whistle and leaves the station. When they reach the big station, however, the guard is cross with Oliver, telling him to wait for the guard's whistle. Oliver and his crew are puzzled, adamant that they did hear a guard's whistle, despite the guard's claims that he was in his van, stacking boxes. Then the fireman figures it out. It was Cocky who made the guard's whistle. When Duck hears about it, he is quick to tease Oliver. 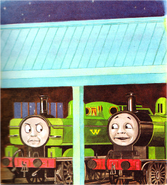 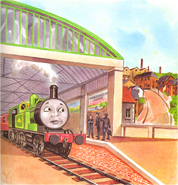 Add a photo to this gallery
Retrieved from "https://ttte.fandom.com/wiki/Oliver_Gets_the_Bird_(1985)?oldid=1553409"
Community content is available under CC-BY-SA unless otherwise noted.