On Track! is a magazine story.

Thomas is returning from the big harbour with a shipment of coal for the main station yard. As he pulls up at a signal, he meets George who is helping to build a new road. George makes his usual rude remarks to Thomas as the signal changes and the little tank engine pulls away. Suddenly, with a loud snap, the last truck's coupling snaps and its load spills out. A huge heap of dirty, dusty coal tumbles down the embankment onto the new road. George thinks Thomas did it on purpose. Now, the road will have to remain closed until the coal can be cleared up. George wants revenge.

A few days later, BoCo runs into trouble. He springs a leak and leaves a lot of oil on the level crossing before crawling slowly back to the main station. Thomas is given BoCo's job and sets off to deliver his trucks to the harbour. When he reaches the crossing, his wheels spin on the oily rails.

Just then, George comes rumbling along. George sees this as a chance to get even with Thomas for messing up his nice new road. While Thomas waits at the level crossing, George rumbles past. He blows out as much smoke as he can to annoy Thomas. George's plan doesn't work and only succeeds in obscuring the visibility of the lorry driver behind. The lorry of sand bumps into the back of George. Fortunately, both vehicles are going slow enough that the only damage caused is a dent to the lorry's bumper, but the jolt sends sand scattering all over the line.

George is happy that all of the sand on the rails will delay Thomas, but it doesn't. When the crossing gates open again, Thomas' wheels no longer slip on the oil. George is left feeling very annoyed with himself. 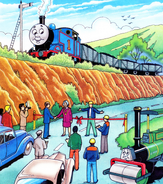 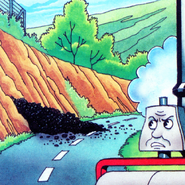 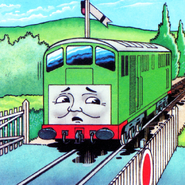 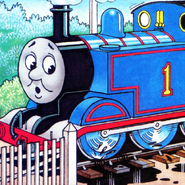 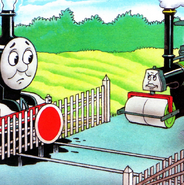 Add a photo to this gallery
Retrieved from "https://ttte.fandom.com/wiki/On_Track!?oldid=1217899"
*Disclosure: Some of the links above are affiliate links, meaning, at no additional cost to you, Fandom will earn a commission if you click through and make a purchase. Community content is available under CC-BY-SA unless otherwise noted.