“Hey presto!”
―The girl dressed as a fairy

Paint for Percy is a magazine story.

Percy needs a new coat of paint and is contemplating being painted silver like Spencer, but finally settles on staying green. Later that day, Percy sees a little girl going to a fancy dress party dressed as a fairy. Percy compliments her for being so bright and colourful. In return, the little girl flicks her wand at Percy, supposedly making him bright and colourful. Percy laughs, rolls into the yard, and waits to be painted at the Works. Suddenly, James speeds by blowing out thick smoke. Percy closes his eyes and suddenly feels sleepy. When he opens his eyes again, he is shocked. The Fat Controller is wearing a yellow top-hat and pink jacket. The Fat Controller then holds up a mirror and Percy is covered in big, blue and yellow spots. Then Percy spots James covered in stars and Thomas covered in stripes.

Suddenly, Percy hears the Fat Controller shouting at him to wake up. Percy opens his eyes and sees that everything is normal. It had only been a colourful dream. Percy then trundles off to the Works to be painted his usual, lovely green. 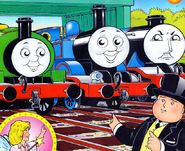 Add a photo to this gallery
Retrieved from "https://ttte.fandom.com/wiki/Paint_for_Percy?oldid=1233093"
*Disclosure: Some of the links above are affiliate links, meaning, at no additional cost to you, Fandom will earn a commission if you click through and make a purchase. Community content is available under CC-BY-SA unless otherwise noted.