Passenger Plane is a magazine story.

The Fat Controller and his grandchildren have built a model plane and plan to fly it on a field with a Model Aircraft Club. Oliver takes them there, and is pleased to be able to watch the planes flying around. Just as Oliver is leaving however, the model plane disappears behind some trees. The grandchildren are sad when they cannot find it. Later, at the station, they board Oliver's train to find the plane on one of the seats. Oliver says it must have flown into one of the open carriage windows, and grandchildren are pleased to have their 'passenger plane' back. 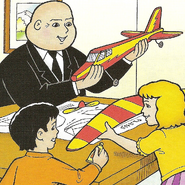 Add a photo to this gallery
Retrieved from "https://ttte.fandom.com/wiki/Passenger_Plane?oldid=615115"
*Disclosure: Some of the links above are affiliate links, meaning, at no additional cost to you, Fandom will earn a commission if you click through and make a purchase. Community content is available under CC-BY-SA unless otherwise noted.