Patrick, previously named Lord Harry and known for a time by his number, No. 6, is a narrow gauge mountain-climbing engine working on the Culdee Fell Railway.

In 1960/1 Culdee and Shane Dooiney were in need of an overhaul, which required them to be sent to their manufacturer in Switzerland. The decision was made to order three new and more powerful engines to assist in the ever increasing traffic. Lord Harry was the first to be built at the Swiss Locomotive and Machine Works in Winterthur, Switzerland, to the latest "superheated" design, and arrived on the Culdee Fell Railway in March 1962 where he was named after the railway's chairman, Lord Harry Barrane.

Lord Harry was troublesome and frightened his coaches by taking risks. After he derailed at the Summit, Lord Harry had his name removed and was sent to the back of the shed. After hearing the tale of Godred and almost getting scrapped, he asked for a second chance, and was given one as a lowly shunting engine. However, when a message came warning that some climbers needed help during a gale, No. 6 went to the rescue with The "Trucks", and was fittingly renamed "Patrick" in honour of a climber who risked his life to help the others.

Like Godred, Patrick was very arrogant, pompous and reckless at first, but learned his lesson after his mountain rescue. Now, he only takes risks if absolutely necessary and is more responsible and mature than ever before.

Patrick is based on the Snowdon Mountain Railway's No.6 Padarn (formerly Sir Harmood, after the chairman of the railway). Padarn was built at the Swiss Locomotive and Machine Works in Winterthur, Switzerland in 1922. 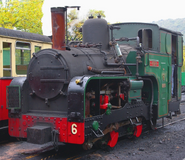 Patrick is painted purple with orange lining. The number "6" is painted on the sides and back of his cab in yellow and he has red nameplates, with his name in gold, on the sides of his tanks.

International Characters
* RWS only | ** T&F only | ✦ Changed location
Culdee Fell Railway
Retrieved from "https://ttte.fandom.com/wiki/Patrick?oldid=1775426"
*Disclosure: Some of the links above are affiliate links, meaning, at no additional cost to you, Fandom will earn a commission if you click through and make a purchase. Community content is available under CC-BY-SA unless otherwise noted.