The Peel Godred Branch Line is run using some little-known electric locomotives to deal with the heavy aluminium traffic on that line.

No details are given as to the locomotives that first worked the line, but Sodor: Reading Between the Lines states that goods traffic is currently handled by engines similar to the BR Class 86 and 87 and the passenger services are run by electric multiple units.

The passenger engines are electric multiple units but their specific basis is unknown. 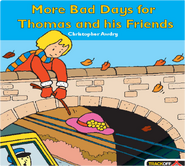 Add a photo to this gallery
North Western Railway
* RWS only | ** T&F only | --- Dropped
Peel Godred Branch Line
* RWS only | ** T&F only
Retrieved from "https://ttte.fandom.com/wiki/Peel_Godred_Engines?oldid=1738025"
*Disclosure: Some of the links above are affiliate links, meaning, at no additional cost to you, Fandom will earn a commission if you click through and make a purchase. Community content is available under CC-BY-SA unless otherwise noted.