“I helped to build that house!”
―Percy

Percy's House is a magazine story.

One day, the Fat Controller gives the engines their jobs for the day. He puts James on the school run and Percy is told to collect cement from the harbour. James teases Percy for being lumbered with collecting cement whil he gets to take the children. The next day, the Fat Controller returns to give the engines their orders again. James is told to pull a slow passenger train and Percy is sent to collect bricks from the harbour. Once again, James laughs at Percy. Later on, James is told to pull a special train taking elderly people on an outing while Percy has to pick up wood from the yard.

The next day, James takes more passenger trains while Percy has to fetch more bricks. The day after that, James has to take people to a football match and Percy has to collect trucks full of metal and glass. James thinks it's all very funny, but Percy gets crosser and crosser. 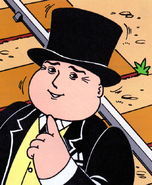 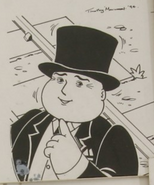 Add a photo to this gallery
Retrieved from "https://ttte.fandom.com/wiki/Percy%27s_House?oldid=1733911"
*Disclosure: Some of the links above are affiliate links, meaning, at no additional cost to you, Fandom will earn a commission if you click through and make a purchase. Community content is available under CC-BY-SA unless otherwise noted.