“The surprise is that a special engine is passing through this station. It's Duke - he is going to the works."
"Duke, our hero? The little engine who was lost and found?"
"The very same!”
―Thomas and Percy

Percy's Surprise is a magazine story.

Thomas tells Percy that he will get a surprise. Percy is excited until he gets to the quarry and finds extra trucks waiting for him. Thinking this is his surprise, Percy is furious with Thomas. Percy confronts Thomas later that day about what he thinks was a trick. Thomas assures Percy that he did not know about the extra trucks and that the surprise is that a very special engine is going to come by the yard. The special engine turn out to be an old narrow gauge engine, their hero, Duke. Percy whistles to Duke who smiles back. Percy agrees that this was a very nice surprise. 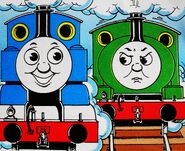 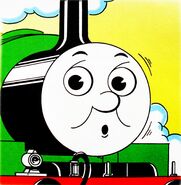 Add a photo to this gallery
Retrieved from "https://ttte.fandom.com/wiki/Percy%27s_Surprise_(magazine_story)?oldid=539556"
*Disclosure: Some of the links above are affiliate links, meaning, at no additional cost to you, Fandom will earn a commission if you click through and make a purchase. Community content is available under CC-BY-SA unless otherwise noted.