Percy is a fictional standard gauge saddletank locomotive created by the Rev. W. Awdry. He is the No. 6 engine on the North Western Railway.

He first appeared in the Railway Series book, Troublesome Engines, which was published in 1950. His last appearance was in Thomas and his Friends, published in 2011.

The Reverend W. Awdry and C. Reginald Dalby did not get along very well. Awdry considered Dalby's drawings "toy-like"; this relationship was worsened by the creation of Percy. When Percy the Small Engine was published, Awdry wrote to Dalby, criticising his illustrations and claiming Percy resembled "a green caterpillar with red stripes". This was too much for Dalby and he promptly resigned. However, the insult was not forgotten: Thomas called Percy "a green caterpillar with red stripes" in Tramway Engines as well as the televised second series episode, Woolly Bear.

Originally to be voiced by Michael Angelis in Thomas and the Magic Railroad, American test audiences claimed that he made Percy sound "too old". Linda Ballantyne voiced him in the final cut, given Percy a faint British accent. Keith Wickham would later take over as Percy in the UK and Martin Sherman in the US, the former giving Percy a British accent and the latter American. Nigel Pilkington and Christopher Ragland would later take over their roles in 2015, giving Percy a British and American accent in their respective English dubs. As another note, Ragland and Pilkington's performances gave Percy a higher and softer voice, most likely to further distinguish him from Thomas, whose voice became bolder in pitch.

Percy was kit bashed from a Larko Dockland saddle tank body kit and 'Spare Percy' from a Tri-ang 'Nellie'; in the 1979 annual Awdry wrote:

"I built Percy in 1949 (the year I wrote "Troublesome Engines" - the book in which Percy first appears) and I soldered him together out of brass and other parts cut and filed to shape. I wanted another engine - Thomas was then the only one I had - and I also wanted a model of Percy to help our then artist draw his pictures; but the artist didn't pay much attention, so my Percy - the proper one - looks different from the Percy in the books. Stewart Reidpath made a chassis for me and fitted it with one of his motors, so Percy is sometimes as temperamental as Thomas and for the same reason. He will run and shunt beautifully for weeks on end and then suddenly and for no apparent reason, decide to be 'awkward'. This can be exasperating, especially at exhibitions. He did this at Nottingham Exhibition 1978 and the only thing to do then was to use my 'Spare Percy' which I had made for just such an emergency.

To make 'Spare Percy' I cut out the boiler and side tanks from a Tri-ang 'Nellie' and filled the resulting space between the cab and smokebox with a section of saddletank cut from an Airfix kit. The outside cylinders came from another Airfix kit and were cemented to 'Nellie's' metal frames with Evostick. I fitted scale size wheels in place of 'Neillie's' rather clumsy ones and filled up the body with plasticine. The good wheels and extra weight has made 'Spare Percy' into a smooth running engine almost as good as the real Percy in his best moments".

Extract from the February 1950 issue of 'The Model Railway News' 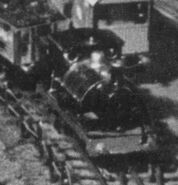 Example of the Tri-ang Nellie that went into 'Spare Percy'

'Spare Percy'
Add a photo to this gallery

Percy's original model was custom built with a perspex body shell and used a Märklin locomotive as a donor for the chassis and various parts. It was painted using automotive paint and lined with red automotive pinstripe tape with the numbers being custom cut vinyl stickers.

Percy's perspex model was originally AC powered as this is how the Märklin locomotives were powered. During a refurbishment his AC motor was replaced by a DC motor to allow for easier running and maintenance.

In the second series episode, Ghost Train, the model was reused as Percy's Ghost Engine. The model was covered in white streamers to represent a ghost.

Percy's Ghost Engine
Add a photo to this gallery

During the production of Thomas and the Magic Railroad another model of Percy was built. This was because the original Märklin chassis was very worn at the time and that the original model had been repaired and repainted so many times the crew was afraid some of these imperfections would be seen on the big screen and the model needed to be in top condition for intense use during filming[1].

The new model was made out of brass and painted in a matte finish. It was equipped with a CNC machined aluminium chassis powered by a DC motor and the bufferbeam details were built from scratch. The original perspex model was also repainted in a matte finish and fitted with a new CNC chassis during the sixth series. The perspex and brass models were used alongside each other for a number of years[1]. One of Percy's new chassis' did not have counterweights (this error transitioned onto his CGI model).

During the production of the tenth series another brass model of Percy was built due to the perspex model being 22 years old at this point and the tight filming schedules meant there was very little room for emergency repairs.

Eighteen different facial expressions were worn by Percy on-screen and one was used for a promotional image. The faces were first sculpted in clay and from that resin casts were made of a silicone mould. Some of Percy's faces were duplicated in case the crew needed a face to look dirty and clean on the same day of shooting. Two of Percy's faces are now owned by Twitter user ThomasTankMerch.

Percy's original smiling face mask that only appeared during the Clearwater Features... (1984-1986)

Percy's original wincing face mask that only appeared during the Clearwater Features... (1984, 1986)

Percy's laughing face that first appeared in the second series... (1986)

Percy's sleeping facemask during production of the second series (1986) 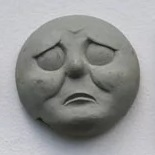 Percy's depressed facemask during production of the second series (1986) 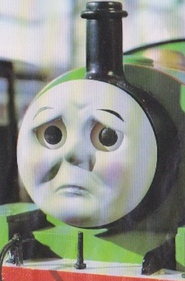 Percy’s depressed face that first appeared in the second series... (1986)

...and last appeared in the ninth series episode, Thomas and the Statue (2005)

Percy with a second wincing face mask which only appeared in the eighth series episode, Percy's New Whistle (2004)

The twelfth series marked the beginning of the show's transition into CGI and the characters' faces were animated through CGI with the aid of motion capture animation. The physical models' moulded faces were replaced by white targets with triangles to fix a computer-animated face in post-production. Percy's resin faces were only used in background shots.

Percy's gauge 1 models had gone through several aesthetic changes in the television series:

One of Percy's brass models is currently on display in Japan at the Hara Model Railway Museum. It had previously been on display at Nitrogen Studios. This example has the CNC chassis without counterweights on the wheels.

During the fifth series the production team were having discussions about scaling up the models to gauge 3.5. Models of Thomas and Percy were built to this scale for testing, but the production team ended up deciding to stick with the gauge 1 models.

Percy's model would later be used alongside the models of the Sodor Construction Company vehicles, which had to be larger than the gauge 1 models in order in fit in all the components required for filming.

Six different facial expressions were created for the model, although only four were used on screen. The faces were first sculpted in clay and from that resin casts were made of a silicone mould.

In the twelfth series the physical models' moulded faces were replaced by white targets with triangles to fix a computer-animated face in post-production.

The model was used in the twelfth series, Jack and the Sodor Construction Company and The Great Discovery.

The gauge 3.5 model has had many modifications from its gauge 1 counterpart. These include:

The model is currently on display in Japan at the Hara Model Railway Museum. It had previously been on display at Thomas Town.

Edward's whistle on a green background used to represent Percy's

Cab exterior shell, made for the third series and last used in the fourth series

In 2009, the series introduced Computer-Generated Imagery (CGI) as a replacement for the show's long-standing live-action models. Percy was recreated from scratch in CGI by Nitrogen Studios. His model was "hand-sculpted" in Maya, a 3D animation and modelling software.

Photographs of Percy's gauge 1 model were used for referencing. According Greg Tiernan, every detail of the original television series models for each character is carefully reproduced in the CGI model. The models are subjected to many rounds of review before they are submitted to HiT Entertainment for final input and approval.

Percy has had modifications throughout the CGI era. These include:

The following pantone colours are used on Percy's CGI model: 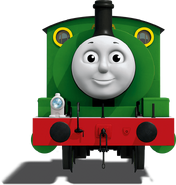 Retrieved from "https://ttte.fandom.com/wiki/Percy/Behind_the_Scenes?oldid=1776327"
*Disclosure: Some of the links above are affiliate links, meaning, at no additional cost to you, Fandom will earn a commission if you click through and make a purchase. Community content is available under CC-BY-SA unless otherwise noted.