Thomas the Tank Engine
and Friends 9

Percy Runs Away is a magazine story.

Gordon, Henry, and James are miserable; they have been shut in the shed for going on strike and long to be let out again. The Fat Controller tells them that they can come out if they promise to be good and stop all the "no shunting" nonsense. The Fat Controller then tells Thomas, Percy and Edward they can go and play on the branch line for a few days. Thomas goes to find Annie and Clarabel while Percy and Edward play with trucks. Then Edward takes some trucks to the quarry, leaving Percy alone. Percy did not mind, as he likes watching the trains and being cheeky to the other engines. After a great deal of shunting, he begins to be rather careless.

Percy is waiting for the signalman to set the points so he can go back to the yard. Unfortunately, Percy forgets to whistle and the busy signalman forgets he is there. Then Percy looks down the main line and whistles in horror. Rushing straight towards him is Gordon with the express. Percy's driver turns on full steam, but Percy's wheels cannot turn quickly enough and Gordon cannot stop. Percy waits for the crash while his driver and fireman jump clear. Luckily, Gordon manages to stop with Percy's buffers just inches from his own. Percy begins to move and reverses right through Edward's station and up Gordon's Hill without stopping. After this, he is very tired, but cannot stop without his driver or fireman. A signalman sees that Percy is in trouble and sets the points to an empty siding. Percy rolls into the siding and ends up in a big bank of earth.

Some workmen start to dig Percy out of the mud. Presently, Gordon arrives. He praises Percy for starting so quickly, preventing a nasty accident. Percy apologises for being cheeky and Gordon pulls him out of the bank of earth. Nowadays, Percy is still cheeky because he is that sort of engine, but he is always most careful on the main line. 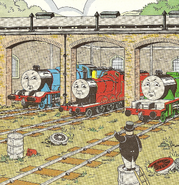 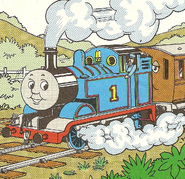 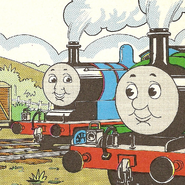 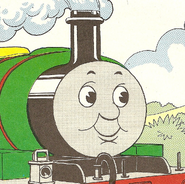 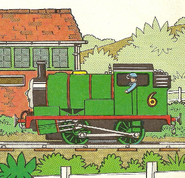 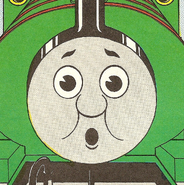 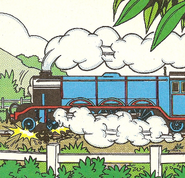 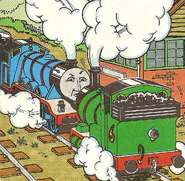 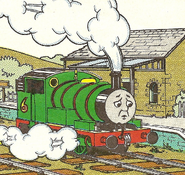 Add a photo to this gallery
Retrieved from "https://ttte.fandom.com/wiki/Percy_Runs_Away_(magazine_story)?oldid=1937608"
*Disclosure: Some of the links above are affiliate links, meaning, at no additional cost to you, Fandom will earn a commission if you click through and make a purchase. Community content is available under CC-BY-SA unless otherwise noted.