Percy and Harold is the twenty-second Buzz Book, based on the second series episode of the same name. It is illustrated using photographs from the television series.

Harold the helicopter thinks railways are slow and out of date. Percy and his crew prove him wrong when they win a race against him. 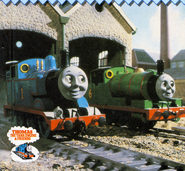 The book picture only shows Toby

Add a photo to this gallery
Retrieved from "https://ttte.fandom.com/wiki/Percy_and_Harold_(Buzz_Book)?oldid=1729054"
*Disclosure: Some of the links above are affiliate links, meaning, at no additional cost to you, Fandom will earn a commission if you click through and make a purchase. Community content is available under CC-BY-SA unless otherwise noted.