Percy and the Magic Carpet

Percy and the Magic Carpet is a magazine story, illustrated using photographs from the television series.

A film star from the Mainland is to visit the island and Percy is given the job of collecting an item from the docks. At the docks, Percy is disappointed to find that his special is only a roll of carpet. Salty suggests that the carpet may be magic and teaches Percy a magic word. As Percy sets off, the carpet gets blown off the flatbed and onto the tracks. Percy says the magic word and the carpet raises back onto the flatbed. The Fat Controller does not believe Percy's story and tells him it was probably just the wind, but Percy knows different. 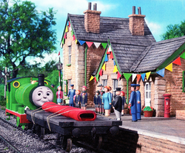 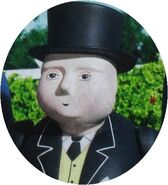 Add a photo to this gallery
Retrieved from "https://ttte.fandom.com/wiki/Percy_and_the_Magic_Carpet_(2010_magazine_story)?oldid=1611659"
*Disclosure: Some of the links above are affiliate links, meaning, at no additional cost to you, Fandom will earn a commission if you click through and make a purchase. Community content is available under CC-BY-SA unless otherwise noted.