Percy to the Rescue

Night time
Percy to the Rescue is a magazine story, illustrated using photographs from the television series.

Thomas is working late one night collecting supplies from the farm. He has been gone a long time and Percy is starting to worry. He thinks Thomas may be in trouble, but the other engines ignore him. Later that night, Thomas still has not returned and Percy asks his driver if they can go and look for him.

Percy is very nervous while he is looking for Thomas as it is very dark, but he has a lamp that lights up the way as they go. Then, Percy hears Thomas' voice calling out to him. Whilst chuffing home, Thomas had been buried and derailed in a landslide. Percy's driver attaches a rope to Thomas and Percy pulls Thomas free. Thomas is very grateful. 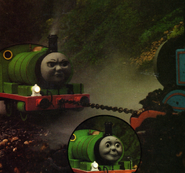 Add a photo to this gallery
Retrieved from "https://ttte.fandom.com/wiki/Percy_to_the_Rescue_(magazine_story)?oldid=1752726"
*Disclosure: Some of the links above are affiliate links, meaning, at no additional cost to you, Fandom will earn a commission if you click through and make a purchase. Community content is available under CC-BY-SA unless otherwise noted.