“It's just like a Roman mosaic."
"And there weren't any steam trains in those days so I will be the only one!”
―Emily

Perfect Picture! is a magazine story.

Some people from the Sodor Museum have found the remains of an old Roman house next to the railway. One day, as Emily is being coupled to some carriages at the Main Station, she sees Lorry 1 arrive with a load of bricks and cement. Builders unload the lorry whilst the Fat Controller and Emily watch them. The Fat Controller tells Emily that an old broken fence behind the station car park is to be taken down and replaced with a wall. Then, Emily sets off for the school; she is to take some children to see the Roman remains. At the site, Emily can see the remains of the colourful patterned floor called a mosaic. The pattern is shaped like a dog. Day after day, Emily watches the wall at the station being built and soon it is finished. The Fat Controller suggests that they paint it, but Emily has another idea; she thinks they should have a pattern on it, much like the Roman mosaic floor. So the Fat Controller rings an artist friend who is pleased to do such a special job. When it is finished, Emily brings it to the station so that it can be put onto the wall. It turns out to be a pattern of Emily made out of tiny tiles and coloured glass. 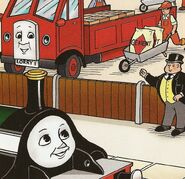 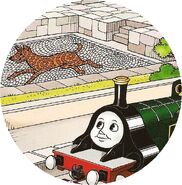 Add a photo to this gallery
Retrieved from "https://ttte.fandom.com/wiki/Perfect_Picture!?oldid=1681357"
Community content is available under CC-BY-SA unless otherwise noted.