“Hurrah to that!”
―Perfect Promise

Perfect Promise is a magazine story.

One morning, Thomas is still in shed after all the other engines have gone to work, waiting for his driver. Presently, Thomas' driver rides into the yard on his bicycle. The Fat Controller tells the driver that he should make a new year's resolution to be on time. After the Fat Controller has left, the driver explains that a resolution is a sort of promise.

Later, Thomas asks Rosie if she has to make a new year's promise. Rosie cannot think of anything, but suddenly, one of her trucks breaks loose. Thomas rushes forward and catches the truck with his buffers, preventing the wayward truck from falling into the turntable pit. Rosie thinks her new year's promise should be as really useful as Thomas.

Later on, Thomas meets Bill and Ben who are playfully rocking their trucks; causing china clay dust to blow everywhere. Thomas thinks the twins should promise not to do that again.

Thomas soon arrives at the harbour where Salty is telling his boring sea stories as usual. Salty is so busy talking that he moves his truck just as Cranky lowers a huge bag of sand. The bag bursts open all over the dockside. Thomas thinks Salty's new year's resolution should be not to tell so many stories and Cranky heartily agrees.

By the evening, all the engines have made new year promises. Rosie asks Thomas what his new year's promise is and Thomas reveals his was to help everyone else make theirs. 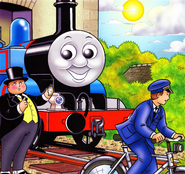 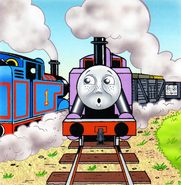 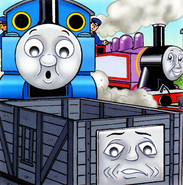 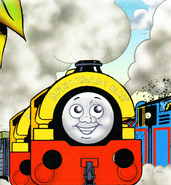 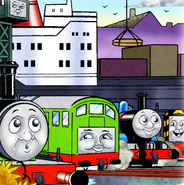 Add a photo to this gallery
Retrieved from "https://ttte.fandom.com/wiki/Perfect_Promise?oldid=1236683"
Community content is available under CC-BY-SA unless otherwise noted.