“I am better than that stunt plane, after all!”
―Tiger Moth

Pictures in the Sky

Pictures in the Sky is a magazine story.

Tiger Moth is feeling sulky; he has arrived at the airfield to cheering crowds, but none of the cheers are for him. They are for a new stunt plane who is making smoke trails in the sky. Tiger Moth boasts that he could do better, but despite his pilot's warning, he is determined to put on a show that the crowds would remember. Against his pilot's wishes, the boastful bi-plane takes off. As he does some terrific somersaults in the sky, black smoke bellows from his engine. When Tiger Moth lands, his pilot is very angry. Tiger Moth on the other hand is delighted, with the thick black smoke he had drawn a moth in the sky. Tiger Moth just buzzes with contentment. 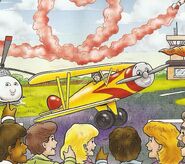 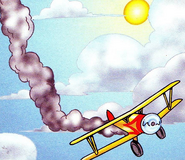 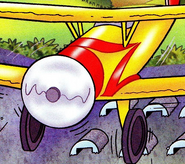 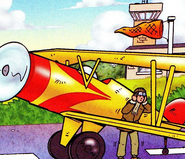 Add a photo to this gallery
Retrieved from "https://ttte.fandom.com/wiki/Pictures_in_the_Sky?oldid=1242376"
*Disclosure: Some of the links above are affiliate links, meaning, at no additional cost to you, Fandom will earn a commission if you click through and make a purchase. Community content is available under CC-BY-SA unless otherwise noted.