Thomas Brosnan and Mary May Smith

Pierce Brendan Brosnan is a Golden Globe-nominated Irish actor who is best known for playing James Bond in four films from 1995 to 2002. Pierce narrated The Great Discovery as a special guest narrator. He had recorded lines for the twelfth series & television series of Thomas & Friends, but when the series aired, Michael Angelis and Michael Brandon remained the series' narrators. Had he stayed as narrator of the series, he would have narrated the twelfth to fourteenth series, as well as three specials. It is unknown why he did not return. A clip of him narrating Gordon Takes a Shortcut has been found, along with a few other short clips.

Brosnan has stated he shares an interest and love of the characters, having read the stories with his children when they were young.

Behind the Scenes with Pierce Brosnan 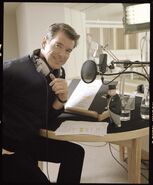 A promo of Pierce Brosnan and Thomas for the twelfth series 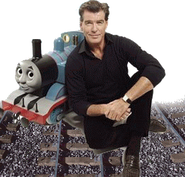 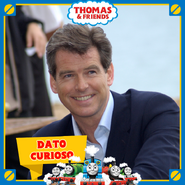 Pierce Brosnan as Chiron in "Percy Jackson and the Lightning Thief"

Pierce Brosnan as Eli McCullough in "The Son"

Español עברית Polski
*Disclosure: Some of the links above are affiliate links, meaning, at no additional cost to you, Fandom will earn a commission if you click through and make a purchase. Community content is available under CC-BY-SA unless otherwise noted.
Advertisement