With Burns Night approaching, the Scottish engines tell the other engines all about Scotland. Donald tells Peter Sam about the Loch Ness Monster and this scares him. That night, as he pulls his train, he hears an eerie noise. At the sheds, all is revealed. The noise was in fact the wind whistling through the bagpipes on one of the trucks. When Burns Night arrives, a party is held at the sheds, which makes the Scottish engines very happy. 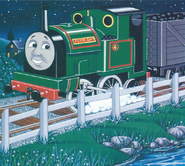 Add a photo to this gallery
Retrieved from "https://ttte.fandom.com/wiki/Pipe_Dreams?oldid=1682474"
Community content is available under CC-BY-SA unless otherwise noted.