South-west of Cabalnoo, Island of Sodor

Pirate's Cove is situated south-west of Cabalnoo, across from the coast of Brendam. The Sodor Maritime Museum is located nearby.

Centuries ago, pirates buried their treasure inside nearby caves after their voyages to the Island of Sodor.

The North Western Railway later extended the Kirk Ronan Branch Line to go past the cove. 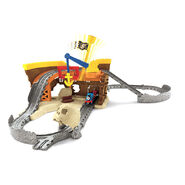 Take-n-Play Thomas at Pirates Cove
Add a photo to this gallery
Kirk Ronan Branch Line
* RWS only | ** T&F only
Retrieved from "https://ttte.fandom.com/wiki/Pirate%27s_Cove?oldid=1759325"
*Disclosure: Some of the links above are affiliate links, meaning, at no additional cost to you, Fandom will earn a commission if you click through and make a purchase. Community content is available under CC-BY-SA unless otherwise noted.