Place to Play is a magazine story.

One afternoon, Thomas is busy shunting in the main station yard when a ball comes flying over the fence towards him. The ball bounces off of Thomas' cab and lands on top of Emily's funnel. Some boys and girls peer over the fence. They are surprised when Emily blows the ball back to them. Emily warns the children that it is not safe for them to play so close to the railway.

Next morning, in the yard, there is a strange smell. James rolls out of his shed and tells the others that the Mayor is coming to the yard for James to take him to a meeting and will not be pleased about the bad smell. The engines soon discover that the smell is dirty Diesel who is waiting to be cleaned. The Fat Controller arrives and immediately notices the smell, too. Suddenly, one of the cleaners at the washdown notices the drain is being blocked by a football, preventing the water from being able to drain away. Then, some children appear and ask for their ball back and complain that they have nowhere else to play.

Meanwhile, it is time for James to take the Mayor. The Fat Controller tells the Mayor that he plans to put up signs saying "DANGER! NO BALL GAMES" near his railway. The Mayor agrees and he boards James' carriage and leaves.

The next day, James proudly takes the Mayor again as Thomas and Emily follow with more passengers. Among the passengers are the children who had kicked their ball into the yards and their parents. The engines pull up at a new playground. As the Mayor cuts the ribbon to declare it open, everyone cheers. The Fat Controller explains that the Mayor had been to a meeting to discuss some wasteland and it was decided to turn it into a playground for the children so that they can play safely. Thomas and Emily are very pleased. 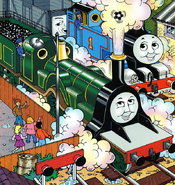 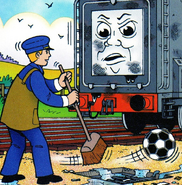 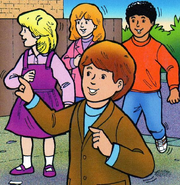 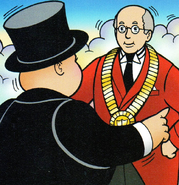 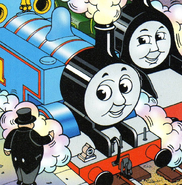 Add a photo to this gallery
Retrieved from "https://ttte.fandom.com/wiki/Place_to_Play?oldid=1660640"
Community content is available under CC-BY-SA unless otherwise noted.