“Thomas is pulling into the number one platform!"
"That's the platform Gordon uses. Stand by for sparks!”
―Bill and Ben

Thomas pulls into the main station with Annie and Clarabel. He has a stand-in driver whilst his regular one is on holiday. Bill and Ben notice that Thomas is pulling in on platform one which is Gordon's platform. The twins are sure the situation will create trouble. When Gordon pulls in and sees that Thomas is standing at his platform, he is not at all happy. Thomas apologises for the mix-up and backs out of the platform.

The next day, Gordon is pulling the express as usual when he slows to a stop. He has broken down and is worried about having to leave his passengers stranded. Luckily, Thomas pulls up and the stand-in driver says that they will fetch some engineers. Soon, Gordon is mended and is very grateful to Thomas.

Later, Bill and Ben are in the yard at the main station again when they spy Thomas and Gordon returning together. The twins stare in amazement as Gordon offers Thomas platform number one. Gordon declares that today platform number one is reserved for the number one engine. 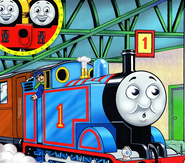 Add a photo to this gallery
Retrieved from "https://ttte.fandom.com/wiki/Platform_Number_1!?oldid=629638"
*Disclosure: Some of the links above are affiliate links, meaning, at no additional cost to you, Fandom will earn a commission if you click through and make a purchase. Community content is available under CC-BY-SA unless otherwise noted.