“Will you carry me, too? Or must I wait for the post train?”
―Stephen, dressed as a pillar-box

Thomas the Tank Engine
and Friends 225

Play Time! is a magazine story.

The Fat Controller's grandchildren, Stephen and Bridget, have come to stay on Sodor. One afternoon, Thomas is to take them to the station near the church hall. As Thomas stands in the main station, he whistles to tell Stephen and Bridget to hurry up. But what the tank engine does not know is that Stephen and Bridget are already on the platform, in costume. Bridget is dressed as a nurse and Stephen as a fireman.

When they arrive at the station near the church hall, a lorry is waiting outside. The driver is unloading a new pillar-box. Then the Vicar arrives to meet Stephen and Bridget and explains that the nearby station is very busy and passengers very often have letters to post. Thomas' driver reminds the children to catch the five o'clock passenger train and Thomas steams off.

Later Thomas spots a pillar-box on the platform outside the waiting room. Thomas thinks it is a strange place to put a pillar-box. Thomas asks Bridget where Stephen is and a voice calls out "over here". Thomas is confused as he cannot see anyone else. He stares in amazement as the pillar-box begins to slowly walk towards him. Thomas thinks he is imagining things until Bridget lifts the lid off the pillar-box to reveal Stephen inside. Stephen explains that the Vicar has made changes to the play; it is now a comedy and it does not need a fireman so Stephen is re-cast as a pillar-box. 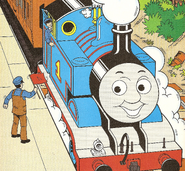 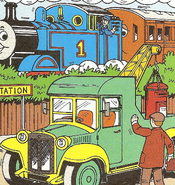 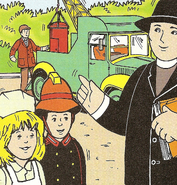 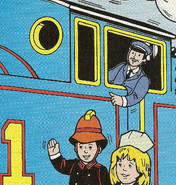 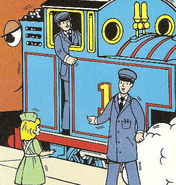 Add a photo to this gallery
Retrieved from "https://ttte.fandom.com/wiki/Play_Time!_(magazine_story)?oldid=1737459"
*Disclosure: Some of the links above are affiliate links, meaning, at no additional cost to you, Fandom will earn a commission if you click through and make a purchase. Community content is available under CC-BY-SA unless otherwise noted.