“Oooh, help!”
―One of the trucks being butted by a goat

Playful Passengers is a magazine story.

At Brendam Docks, BoCo's trucks are behaving badly. They keep bumping their buffers and jolting into him. Duck's trucks are just as bad; some of them break loose and clattered around the docks. Next day, the Fat Controller states that he needs two engines to deliver some animals to market. Duck and BoCo have an idea. They volunteer to go with their trucks. Soon, the two engines are in the farmyard siding. All the farmyard animals are making such a noise that the trucks can not hear themselves sing. Some animals escape and startle the trucks and hens flap everywhere. Next, a billy goat is led aboard one of the trucks. It begins butting the truck's sides which the truck does not like one bit. Soon, all the animals have calmed down and one of the trucks sees something that makes him shake in terror - a bull. The bull has huge sharp horns, but luckily he is not for sale. The trucks have now learnt their lesson. 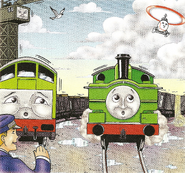 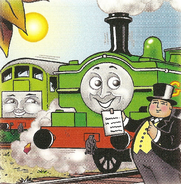 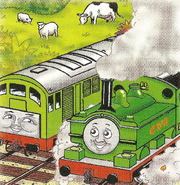 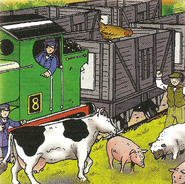 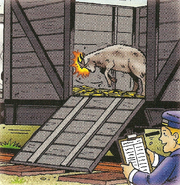 Add a photo to this gallery
Retrieved from "https://ttte.fandom.com/wiki/Playful_Passengers?oldid=1421402"
Community content is available under CC-BY-SA unless otherwise noted.