Diesel hates Duck so he tells lies about the big engines to the trucks and tells them that they came from Duck. Sir Topham Hatt sends Duck away to Edward's station. 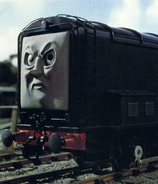 Add a photo to this gallery
Retrieved from "https://ttte.fandom.com/wiki/Pop_Goes_the_Diesel_(Buzz_Book)?oldid=1669188"
*Disclosure: Some of the links above are affiliate links, meaning, at no additional cost to you, Fandom will earn a commission if you click through and make a purchase. Community content is available under CC-BY-SA unless otherwise noted.