Bumpy Boiler (by Bill and Ben)

Porter is a saddle tank engine who works at Brendam Docks.

When Salty was experiencing engine trouble, the Fat Controller brought Porter to Sodor to work at Brendam Docks while he arranged for Salty to be mended at the Vicarstown Dieselworks. When Porter arrived to help out, Salty was convinced that Porter had been sent to replace him. After some mishaps, Porter managed to stop Salty from having an accident, then using his sand domes to sand the rails after Salty accidentally spilt oil on them. Later, the Fat Controller told Salty that he was to work with Porter and that he was not going to be replaced.

When Bill and Ben teased Harvey about "going fishing" and made fun of Porter's three domes, Porter helped Harvey see the positive side of being both a crane and an engine. Later, Porter helped arrange the Flying Kipper for James after he made Henry late the previous night.

He also warned Thomas, Salty and the dock workers of Percy's runaway trucks, told Gator, who was waiting for his ship to arrive, that nobody is worried about how Gator looks, teased James when he was collecting "The Flying Kipper" and witnessed Cranky almost falling into the sea while trying to stop Gator's ship.

While Salty was working on the Mainland, Porter was left to do the work alone. Timothy arrived to help after Bill and Ben told Sir Topham Hatt that Timothy was no help at the Clay Pits. Porter and Timothy worked well together until Salty returned. When the Clay Pits became a mess due to Timothy's absence - and Bill and Ben's immaturity - he, Salty and Timothy helped Bill and Ben clear up.

When Salty was accidentally knocked off of the docks, Porter was left with a quadrupled workload, his own already having been doubled due to the amount of ships coming in. During the frantic rush to sort the docks out, Carly accidentally dropped some sacks of flour on top of him, clogging his funnel and taking him out of action.

Porter is a kind and helpful engine, with a good sense of self-confidence and does not worry about what other engines say about him, such as calling him a ‘camel’ because he has so many ‘humps’ (domes). Porter is not above engaging in a bit of friendly dockside banter himself, but when another engine is feeling low he can be very supportive. Porter’s easy-going manner makes him very popular. He is a hard worker, although he can be a bit of a perfectionist at times. He is also very brave and can keep his head cool in a crisis... though he can feel rushed like any other engine.

Porter is based on the H.K. Porter 0-6-0ST, built in Butler, Pennsylvania, north of Pittsburgh. These mainly worked in the dockyards on the east coast of the United States. The Brooklyn Eastern District Terminal Railroad, which served the dockyards in Brooklyn, New York, owned several examples of Porter's design, all of which were retired after the railroad started using diesel locomotives in 1963. One of these, B.E.D.T. 15, was rebuilt into an operating replica of Thomas by the Strasburg Railroad in 1998 for use during Day Out with Thomas events throughout the US. Porter appears to be directly based on B.E.D.T. 15 prior to its rebuild. Another engine, 14, is preserved at the Ulster & Delaware Railroad Historical Society in Arkville, New York. Yet another is preserved in Essex, Connecticut on the Valley Railroad. 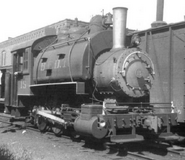 Porter's basis
Add a photo to this gallery

Porter is painted viridian with yellow stripes and lining, brass fittings and gold nameplates with black lettering. He has a gold star on each side of his lamp and red window frames.