The porters help passengers aboard a passenger train or to handle their baggage. They often have to cross the railway line to get the baggage across to the coaches.

The porters on Sodor tend to be very clumsy and accident prone and are linked to several incidents that happened around the Island, such as the time Percy tried to surprise the coaches and spilled sticky jam all over the passengers and the Fat Controller and the time two porters broke a beehive at the station.

A North Western Railway porter's uniform consists of blue or green trousers, a black tie, a white shirt, a long blue overcoat and a blue cap.

Fred and Bert
Add a photo to this gallery

A porter in the television series

A porter in the second series

Porters in the third series 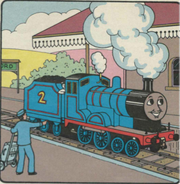 A porter in a magazine story 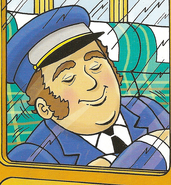 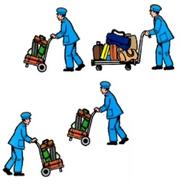 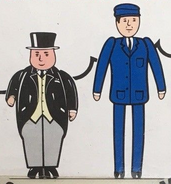 Second ERTL promo art
Add a photo to this gallery 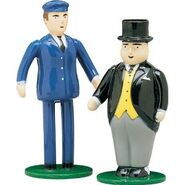 ERTL Trading Card
Add a photo to this gallery
Retrieved from "https://ttte.fandom.com/wiki/Porters?oldid=1732877"
*Disclosure: Some of the links above are affiliate links, meaning, at no additional cost to you, Fandom will earn a commission if you click through and make a purchase. Community content is available under CC-BY-SA unless otherwise noted.