“Thank you, Molly. Together, we're the Island of Sodor's best post-train-plane team!”
―Jeremy

Molly is pulling the early morning mail train when she stops at the airport as Jeremy is coming in to land. Jeremy has brought the mail over from the Mainland and now Molly has to deliver the mail Jeremy brought and collect the mail on Sodor so that Jeremy can take it to the Mainland. The yellow engine has soon collected all the post on Sodor and returns to the airport. On her way, she is flagged down by a man whose car has broken down on the way to the airport. Molly offers the man a lift.

When she arrives at the airport, Jeremy is waiting for her. Molly tells him that he can go now that he has got her mail, but the jet plane cannot. His pilot has gone off duty and the new one had not yet arrived, or so he thought. Then, the man whose car broke down stepped down from Molly's guard's van - it was Jeremy's pilot. This time, instead of teasing Molly about being old-fashioned, the jet plane thanks her. 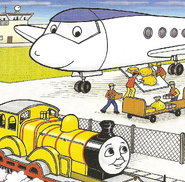 Add a photo to this gallery
Retrieved from "https://ttte.fandom.com/wiki/Post_Train_Plane?oldid=1450490"
*Disclosure: Some of the links above are affiliate links, meaning, at no additional cost to you, Fandom will earn a commission if you click through and make a purchase. Community content is available under CC-BY-SA unless otherwise noted.