“That's not a prickly pygmy pig or a prickly mouse! It's a hedgehog! I know a good place for it to live!”
―Emily's driver

Prickly Pig! is a magazine story.

Terence is ploughing a field when he suddenly spots a creature which looks like a prickly mouse. The prickly mouse wanders towards the railway line. Terence hears a train coming and shouts for the prickly mouse to stop. The prickly mouse curls into a ball as Emily approaches and applies her brakes. Emily says that it is not safe for a prickly pygmy pig to live close to the tracks. Terence admits that he thought it was a prickly mouse, but whatever it is, both are agreed that they must find it a new home.

Terence suggests that they put the creature in a tree, but Emily does not think that's a good idea; the creature does not have wings and might fall out. Then Terence suggests the farm, but it might be too noisy. In the end, they ask Emily's driver. First of all, the driver puts Emily and Terence right by telling them that the creature is actually a hedgehog. The driver puts on some gloves and picks up the hedgehog. Emily carries them to the cottage of a retired stationmaster. 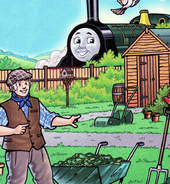 Add a photo to this gallery
Retrieved from "https://ttte.fandom.com/wiki/Prickly_Pig!?oldid=1363860"
*Disclosure: Some of the links above are affiliate links, meaning, at no additional cost to you, Fandom will earn a commission if you click through and make a purchase. Community content is available under CC-BY-SA unless otherwise noted.