“Wake up, Sir, or you'll miss your train!”
―Stephen Hatt talking to a guy

Prize Guys is a magazine story.

Stephen and Bridget make a Guy Fawkes effigy for Bonfire Night. They bring it to the main station where the Fat Controller gives them an old driver's uniform to dress it in. Stephen and Bridget tell Thomas that they are taking it to a competition being held at Wellsworth Park.

At Wellsworth, two other children leap from the carriage - leaving their guy behind. By the time they realise, Thomas has already steamed away. Meanwhile, inside the carriages, a ticket inspector is asking a man for his ticket. The man does not reply so the ticket inspector prods him and realises that it is a guy. When Thomas returns to the main station, the inspector sits the guy on a bench. Stephen and Bridget soon walk up to it and thinking that it is a real man, try to wake him up so that he does not miss his train. They then realise it is a guy and think it would be a fun idea to put their own guy next to it on the bench.

Shortly, the two children and their mother arrive at the main station; they have been told that their guy has been taken there. They soon find it and laugh when they discover he has made friends with another guy. Soon Thomas takes Stephen, Bridget and the two children to the competition at Wellsworth Park.

At the Park, all of the guys were put on display. The local stationmaster is a judge and after a short while announces that they have two winners; Stephen and Bridget and their two new friends. Thomas thinks it is only right that they should both win as they both seemed to fool people at the main station. 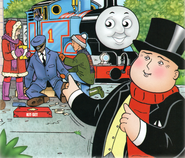 Add a photo to this gallery
Retrieved from "https://ttte.fandom.com/wiki/Prize_Guys?oldid=1582612"
*Disclosure: Some of the links above are affiliate links, meaning, at no additional cost to you, Fandom will earn a commission if you click through and make a purchase. Community content is available under CC-BY-SA unless otherwise noted.