Proteus is a legendary narrow-gauge tank engine with a magic lamp hung upon his funnel.

Proteus was a very old engine from the hills of Sodor with a magical lamp, and the legend goes that if any engine ever found it, their wishes would come true. The clues to finding the magic lamp are feeling a rush of wind when the lamp is near, hearing a strange creaking sound, and see a flickering light that shines on and off.

In the ninth series, Skarloey told Proteus' story to the other narrow gauge engines and Thomas. At first, Peter Sam scoffed at the tale, but almost thought he discovered the lamp himself. But he later realized that maybe just believing in the lamp will grant your wishes.

In the twelfth series, Miss Mary Marvel, a famous storyteller, read stories about the legend at a special show. Later, Peter Sam found a neglected statue of Proteus that was lost for many years. The statue was then restored and is now preserved in a park near the Skarloey Railway.

Proteus is based on the Talyllyn Railway's Sir Haydn, a Hughes Falcon 0-4-2ST. Sir Handel and Albert share the same basis.

Proteus' basis
Add a photo to this gallery

Proteus is painted bright yellow with red lining. All of Proteus' merchandise shows him with nameplates, even though he never had any in the television series. Proteus' TrackMaster model depicts him with gold side rods instead of his original, silver ones.

Proteus in the ninth series

Proteus' statue in the twelfth series 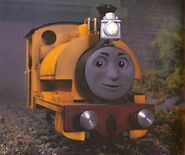 A promotional image of Proteus

The statue of Proteus at the Showgrounds

Proteus, Smudger and Freddie
Add a photo to this gallery 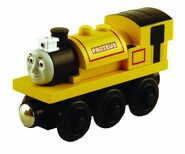 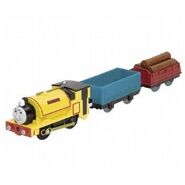 TrackMaster promo that depicts Proteus with the No. 3
Add a photo to this gallery

Skarloey Railway
* RWS only | ** T&F only
Retrieved from "https://ttte.fandom.com/wiki/Proteus?oldid=1749334"
*Disclosure: Some of the links above are affiliate links, meaning, at no additional cost to you, Fandom will earn a commission if you click through and make a purchase. Community content is available under CC-BY-SA unless otherwise noted.