“Ssssh! Stop that! You're all giving me a headache!"
"Stop being a spoilsport, you fussy old puffer!”
―Henry and the Troublesome Trucks

Proud and Loud is a magazine story.

One day, Henry stops at a station to have a drink. The next moment, some Troublesome Trucks come clattering playfully along, bumping buffers as they go. Henry tells them to be quiet, but the trucks tell Henry to stop being a spoilsport. To make matter worse, there is a traffic jam near the station and motorists begin to honk their horns loudly.

Henry is pleased when it is time to leave. When Henry passes the airport, a huge jet takes off right over him with its engines screaming. Then, at the level crossing, Henry has to stop to let a police car through with its siren blaring.

At the station, a loudspeaker booms out Henry's arrival to the passengers. By now, Henry's head is spinning. Then, a banging noise nearly makes him jump off the rails. The driver tells Henry that it is the bass drum of the Sodor Brass Band who are rehearsing at the Town Hall nearby.

At last, Henry returns to the main station and asks the Fat Controller if he can rest in the sheds for some peace and quiet. The Fat Controller says that's a shame since he had chosen Henry to take everyone to the Guy Fawkes Parade. Henry had completely forgotten that it is November the fifth. He quickly forgets about his headache, too.

So, Henry proudly puffs to the parade with his passengers. Children dressed as Guy Fawkes march happily behind the Sodor Brass Band, pushing a big model guy. The crowd cheer as the band plays. Henry huffs, puffs and whistles loudly, too. The Fat Controller is surprised that Henry is now making more noise than anyone. 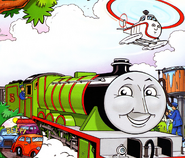 Add a photo to this gallery
Retrieved from "https://ttte.fandom.com/wiki/Proud_and_Loud?oldid=1145756"
*Disclosure: Some of the links above are affiliate links, meaning, at no additional cost to you, Fandom will earn a commission if you click through and make a purchase. Community content is available under CC-BY-SA unless otherwise noted.