“It looks like you got to taste a pumpkin pie, after all!”
―Thomas to Percy

Pumpkin Pie! is a magazine story.

One autumn day, Percy sees Thomas pulling trucks loaded with pumpkins. Thomas explains that he is delivering the pumpkins to the Vicarage Orchard for the pumpkin festival. Thomas explains that they have contests at the festival to see who can carve the funniest jack-o-lanterns and who can make the biggest pumpkin pies. Percy begins to wish that he was delivering the pumpkins to the festival. Percy licks his lips at the thought of pumpkin pie, but Thomas is quick to inform Percy that pies are for people, not engines. Percy goes on his way, still trying to imagine what pumpkin pie tastes like.

Thomas pulls up close to the Vicarage Orchard. The pumpkins are unloaded into wooden carts which Trevor is to tow to the orchard. When all of his trucks are unloaded, Thomas pulls away to start his next job which is to pick up passengers for the pumpkin festival. Trevor has to make several trips between the train tracks and the vicarage orchard. A few carts are still left across the tracks.

A little later, Percy, who still cannot stop thinking about pumpkin pies, decides to sneak to the orchard to see if he can catch a glimpse of the festival. As he rolls towards the orchard, he sees a cartload of pumpkins on the line ahead. Percy tries to brake, but he isn't quick enough and crashes into the cart. Pumpkins fly everywhere and one gets stuck on Percy's funnel. The tracks are now covered in wood and orange mess. Just then, Thomas passes by with his first load of passengers for the festival. Thomas cannot believe his eyes; it looks like Percy got to taste pumpkin pie, after all. 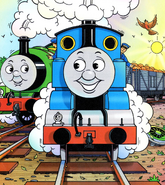 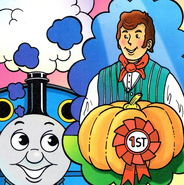 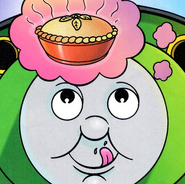 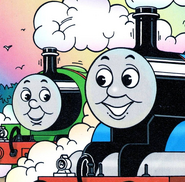 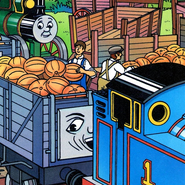 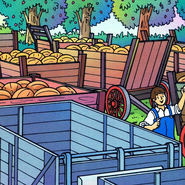 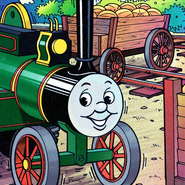 Add a photo to this gallery
Retrieved from "https://ttte.fandom.com/wiki/Pumpkin_Pie!?oldid=1243278"
*Disclosure: Some of the links above are affiliate links, meaning, at no additional cost to you, Fandom will earn a commission if you click through and make a purchase. Community content is available under CC-BY-SA unless otherwise noted.