Railway Map of the Island of Sodor

The Rev. W. Awdry's Railway Map of the Island of Sodor was a Railway Series related publication featuring a map of Sodor.

The Rev. W. Awdry's Railway Map of the Island of Sodor was created as part of a program of diversification began by Eric Marriott following the death of Franklyn Edmund Ward in 1957, who had never favoured producing spin-offs based on the Railway Series. Announced in Edmund Ward's 1958 catalogue, the map cost two shillings and sixpence and was 22 in by 11 in. It was, like the best Ordinance Survey Maps, linen-backed, but printed, unlike O.S. Maps, in bright colours with distinctive 1950s lettering. The map had a nursery wallpaper border and was fancifully embellished with boats, dolphins, mermaids and such, as it was intended as a decoration for children's bedroom walls.[1]

As there was to be no new book in 1971, Peter Edwards was commissioned to redraw the map for a second edition. The map was updated with new railways that had been "discovered" since the original publication and was reproduced to look like an authentic Ordinance Survey Map - complete with contour lines, rivers, railways, etc. at Edwards' own initiative. Some years after its publication, Edwards' saw the map as part of an exhibition at the British Museum on fictional cartography.[2] This version of the map was included in Sodor: Reading Between the Lines.

When Christopher Awdry began writing books for the Railway Series, a third edition illustrated by Clive Spong was published. A modified version of this was included in The Island of Sodor: Its People, History and Railways. 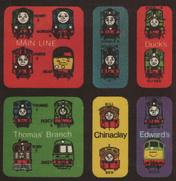 The Railway Series
Retrieved from "https://ttte.fandom.com/wiki/Railway_Map_of_the_Island_of_Sodor?oldid=1708135"
Community content is available under CC-BY-SA unless otherwise noted.