Thomas the Tank Engine Wikia
Register
Don't have an account?
Sign In
Advertisement
in: Ravenglass and Eskdale Railway, Railways, Other railways,
and 3 more
English

The Ravenglass and Eskdale Railway opened on 24th May 1875, its purpose being to ferry iron ore from workings near Boot to the coast at Ravenglass. On 20th November 1876 the first passengers were carried. Built to a gauge of 3 feet (910mm), problems soon arose relating to the iron ore and the line was declared bankrupt as early as 1877. The line finally closed in 1913.

Unused for two years, in 1915 the miniature railway engineer W. J. Bassett-Lowke and his friend R. Proctor-Mitchell, (representing Narrow Gauge Railways Ltd) acquired the line as a base for testing their little locomotives under fairly harsh operating conditions. By 1916 the re-gauged track (15"/381mm) ran as far as Irton Road, while during the following year the miniature trains were running the full length of the line.

Quarrying recommenced on the line near Beckfoot and granite blocks were transported to Murthwaite, where they were crushed for use mainly as road stone and railway ballast. By 1946 ownership had transferred to the Keswick Granite Company, who decided in 1953 to cease quarrying operations. With the exception of the war years passenger traffic continued throughout.

However, in 1958 and again in 1959, the line and fittings were offered for sale but, without any serious potential purchaser, it was announced that the 1960 season would be the last. The railway was to be sold by auction in September. The Ravenglass and Eskdale Railway Preservation Society was formed by enthusiasts, but hopes were not high. Fortunately, two interested parties, (Colin Gilbert, a Midlands stockbroker and Sir Wavell Wakefield, a local landowner) stepped in on the day of the auction with the balance of the purchase price.

In 1968, the railway moved on, becoming an integral part of the Wakefield family business in the Lake District. Much work had already been done to catch up with the backlog of maintenance, new coaches had been built and the Preservation Society had funded the building of a new locomotive, the River Mite. Further major works continued, with Ravenglass station being re-modelled and a further locomotive, Northern Rock was built in the company's workshops, entering service in 1976.

In 2005, work started on the building of a new station and visitor centre at the Dalegarth terminus. The building was officially opened by Pete Waterman in April 2007. 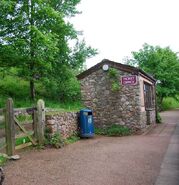 Days Out with Thomas 2020 Advertisement.

The Ravenglass station pilot Les at a Days Out with Thomas event on the Romney, Hythe and Dymchurch Railway

United Kingdom
* RWS only | ** T&F only
עברית Polski
*Disclosure: Some of the links above are affiliate links, meaning, at no additional cost to you, Fandom will earn a commission if you click through and make a purchase. Community content is available under CC-BY-SA unless otherwise noted.
Advertisement