“How can food be fast? Do you have to catch it before you eat it?”
―Thomas

Thomas is taking Lady Hatt and her grandchildren to Wellsworth to do some shopping. Stephen is excited to be visiting the Sodor Snack Bar which has just opened near the station and sells fast food. Thomas is confused until Stephen explains it is called "fast food" because it is quick to make and serve. Just then, the guard blows his whistle and Thomas sets off for the next station.

On the way, Thomas meets Elizabeth who is puffing hard to get up a steep hill. She is carrying heavy boxes of fish for the restaurant. Thomas jokes that Elizabeth is carrying "slow food".

Later, out in the countryside, Thomas spots Terence ploughing furrows in a field. Thomas asks if Terence grows fast food in his fields as he pulls up at a signal. Terence jokes that they grow runner beans and explains that crops take a long time to grow from seeds before they are picked.

When Thomas collects Lady Hatt, Stephen and Bridget, he gets to hear all about the new snack bar where the three of them have milkshakes, fishcakes and pizza slices.

That night, in the engine shed, Thomas dreams about food flying quickly through the air while outside, rain hammers down. So much, that by morning, there is an emergency. The Fat Controller arrives in the shed to tell Thomas that a village is cut off by floods and Harold is going to fly food supplies to the villagers. Thomas is needed to take the food to the airport.

Thomas races along, collecting boxes of food until he finally arrives at the airport where Harold is waiting. The boxes of supplies are quickly unloaded and put on board Harold before he takes off into the sky to make his urgent delivery.

The next day, Stephen and Bridget praise Thomas for being so helpful and the little tank engine tells them that no-one can deliver food faster than himself and Harold. 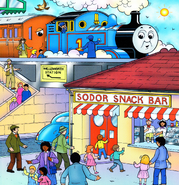 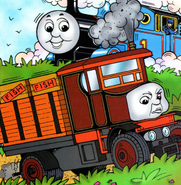 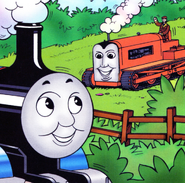 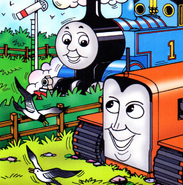 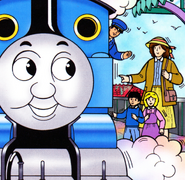 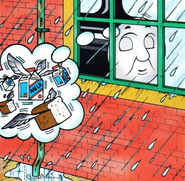 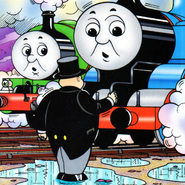 Add a photo to this gallery
Retrieved from "https://ttte.fandom.com/wiki/Really_Fast_Food!?oldid=1642893"
*Disclosure: Some of the links above are affiliate links, meaning, at no additional cost to you, Fandom will earn a commission if you click through and make a purchase. Community content is available under CC-BY-SA unless otherwise noted.