“Well done, Oliver! You're a really useful engine!"
"Hear that, Diesel? You can scrap any idea of me being scrapped!”
―the Fat Controller and Oliver

Thomas the Tank Engine and Friends 219

One morning, the Fat Controller is wandering around Knapford Station Yard, talking to the engines' drivers and then making notes on a piece of paper. The engines are puzzled. Diesel tells Oliver that he is probably writing down which engines should be sent for scrap. He goes on to say that Oliver is probably at the top of the list. Oliver is worried because he has already been saved from scrap, but his driver solves the mystery. He says the Fat Controller is working on a new timetable. Relieved Oliver confronts Diesel about his nasty comments, but the oily engine thinks it was funny.

Just then, Mavis returns from Anopha Quarry. She is pulling trucks full of stone. A huge stone rolls off the last truck just as the points are changing behind her. Percy comes puffing through and he cannot stop in time to avoid hitting the stone.

The Fat Controller quickly puts his notes inside his top hat to keep them safe before going to investigate the accident. Percy and Mavis anxiously apologise, but the Fat Controller is not angry; it was just an accident.

The chief engineer soon arrives to check underneath Percy for damage. The engineer reports that there is no harm done and Percy had been very lucky. Percy slowly backs up so that a crane can lift the big stone off the rails. Now, the Fat Controller gets back to working on his new timetable, but he cannot find his notes anywhere. He searches all over the yard and thinks he will have to start again.

Then, Diesel rolls past and accidentally hits a low-hanging, dead tree branch. Oliver sees it snap off and that it is about to fall on the Fat Controller. He warns the Fat Controller to look out. The Fat Controller leaps aside and his hat falls off. As he bends down to pick it up again, he is delighted to see the notes inside. He calls Oliver a really useful engine and Oliver proudly tells Diesel that he can scrap any ideas of him being scrapped. 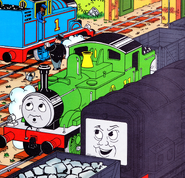 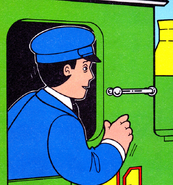 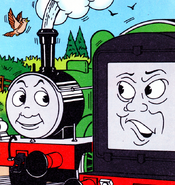 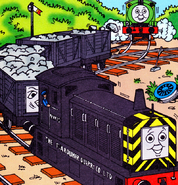 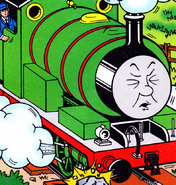 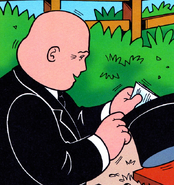 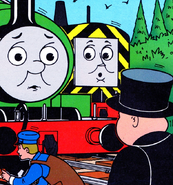 Add a photo to this gallery
Retrieved from "https://ttte.fandom.com/wiki/Really_Useful_Oliver!?oldid=1246215"
Community content is available under CC-BY-SA unless otherwise noted.