“Well done, Thomas. You, James, Henry and Gordon have saved the relay race!"
"And we're a really useful relay team too!”
―the Fat Controller and Thomas

A sports stadium with an impressive running track has just been built on Sodor. Thomas and James pass by and see some athletes training for the first ever Sodor Games. Four runners take it in turn to race along part of the track, each handing over a small stick to the next runner. Thomas' driver explains that it is a relay race, which James thinks they sound fun. Later, Thomas and James tell the other engines about the relay race.

The next day, Thomas and James are sent to collect people and take them to the stadium. One of James' passengers is the Mayor who will open the games.

The Fat Controller arrives at the games with other passengers, only to soon realise that he has forgotten the prize cup for the winner of the relay race. He quickly telephones the shopkeeper who has the cup and it is rushed to a station for Henry to collect.

Henry arrives at the station and takes possession of the important cup. Soon, Henry sees Gordon who has been sent to meet him. Henry's crew pass the cup to Gordon's guard. Gordon then puffs as fast as he can to the junction where the cup is handed to James.

James puffs so fast that he almost runs out of steam. He is relieved to see Thomas who takes the cup from him and then rushes it to the stadium. The Fat Controller is really pleased and says that Thomas, James, Henry and Gordon have all saved the relay race. Thomas thinks he and his friends make a really useful relay team, too. 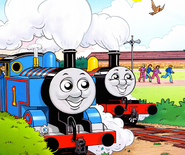 Add a photo to this gallery
Retrieved from "https://ttte.fandom.com/wiki/Relay_Rescue?oldid=1920313"
*Disclosure: Some of the links above are affiliate links, meaning, at no additional cost to you, Fandom will earn a commission if you click through and make a purchase. Community content is available under CC-BY-SA unless otherwise noted.