Revving Racers is a magazine story.

One morning, Thomas pulls into Lower Suddery station when Lorry 1 and Lorry 2 pull up. The two lorries are revving their motors so much, Thomas cannot hear himself peep. Then, the lorries' drivers start unloading haybales from their vehicles. Thomas is confused because the Horrid Lorries usually only carry building supplies, but they tell the tank engine that it is a special delivery. Thomas is still puzzled as the haybales are placed beside a sharp bend in the road. The lorries will not tell Thomas what the haybales are for, but they do say that if Thomas finds them noisy, he has not heard anything yet. Thomas thinks the troublesome lorries are just pulling his buffers and he sets off for the main station. Just then, he sees posters reading 'GRAND SODOR ROAD RACE' being stuck up.

A few days later, Thomas is sent to Brendam Docks with a flatbed truck, so are BoCo and Salty too. Cranky carefully unloads colourful racing cars from a big ship and puts them on the engines' flatbeds. The engines then carry their unusual loads to the start of the road race.

Before long, all the racing cars are ready. Then, James and Henry arrive with carriages full of excited passengers. Thomas can now see that the haybales have been used to mark out the route for the race. Next moment, Lorry 1 and Lorry 2 arrive just in time to see all the cars start up with their engines roaring and revving deafeningly as they speed off. Thomas does not like the noisy cars very much and is glad when the race is over and the cars are taken back to the Mainland.

A few days later, Thomas is in the main station yard. He is helping Duck, Percy and James to move lots of trucks full of building materials, brought from the harbour. Lorry 1 and Lorry 2 roar up to collect the supplies from the yard. Thomas and the other engines puff, huff, hiss and whistle. Brakes squeal and the trucks clatter while buffers bump. The lorries cannot wait to leave the yard and the tremendous racket. The lorries did not think Thomas liked noise, but Thomas says the noise of the yard is music to him. 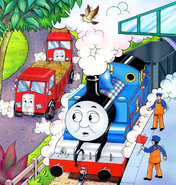 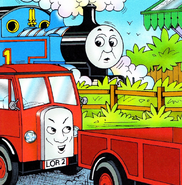 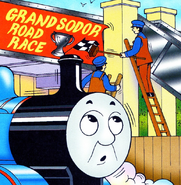 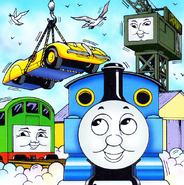 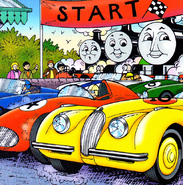 Add a photo to this gallery
Retrieved from "https://ttte.fandom.com/wiki/Revving_Racers?oldid=1407504"
*Disclosure: Some of the links above are affiliate links, meaning, at no additional cost to you, Fandom will earn a commission if you click through and make a purchase. Community content is available under CC-BY-SA unless otherwise noted.