Thomas the Tank Engine Wikia
Register
Don't have an account?
Sign In
Advertisement
in: 0-4-0, Skarloey Railway, Steam locomotives,
and 6 more

Rheneas is a narrow gauge well tank engine and the Skarloey Railway's second engine. Dolgoch from the Talyllyn Railway is his twin and Skarloey is his brother.

Rheneas was built by Fletcher, Jennings & Co. in Whitehaven, England and was delivered by sea to Kirk Ronan in time to haul the train carrying the Board of Trade Inspector in October 1865. Unlike Skarloey, Rheneas was stern and thoughtful and fell out with Skarloey after the latter called him a "stick-in-the-mud" following an argument over cabs. The two reconciled after Rheneas saved Skarloey from a landslide in 1867.

Rheneas' long wheelbase enabled him to ride steadily, but it also made him hard on the track and this - together with the initial absence of a cab - made Skarloey the more heavily used of the two. Unlike Skarloey (and Dolgoch), Rheneas never returned to Whitehaven. Such repairs as were needed - including the fabrication of a cab at an unknown date - were done at the Skarloey Railway workshops. In 1937 and again in 1943, he was overhauled at the NWR Works at Crovan's Gate. Like Dolgoch, Rheneas enjoys "peculiar motion", which did not make life any easier for the workshop staff.

Rheneas saved the railway by keeping services going through a very lean period in the late 1940s. By 1945, Skarloey was in need of desperate repairs, leaving Rheneas to run the line alone. He managed to pull a full train home one windy day despite having a jammed valve gear and was rewarded with an overhaul. When Sir Handel and Peter Sam arrived to the railway in 1952, he was sent to England for a heavy overhaul. While there, he was reunited with his twin Dolgoch. Money, however, was tight on both their railways and their repairs could not be completed immediately. Skarloey often felt lonely to know Rheneas was not there, but he often used his story of when he saved the railway to teach younger engines how to behave, like Duncan. His overhaul was finished in 1961, putting him back into good condition and he returned to the Skarloey Railway soon after. Because of his bravery, he earned the nickname "Gallant Old Engine" by the railway staff.

While Rusty was spreading weedkiller spray on the tracks with a special truck, Rheneas had to fetch another coach when there were more visitors than usual. He was not happy about this because this meant he would be late and it did not get any better when he had to slow down for hedgecutters. To make matters worse, because of the weedkiller spray, he ended up slipping down the hill and ground to a halt. As his crew sanded the rails, he managed to make his way, but his passengers had a limited view of the countryside. They did not mind this however, as they were more pleased with Rheneas' brave efforts.

Rheneas underwent another heavy overhaul at Crovan's Gate Works in 2002.

Rheneas has been called a "gallant old engine" before and deserves such a title; he is highly determined, brave and courageous. Rheneas is a tough, committed worker despite his age and takes great responsibility in his work. He is keen to keep his friends smiling and, although he is a level-headed engine, he can be a bit of an adventurer too. Though he may often try to struggle on alone, Rheneas knows when it is time to call on the help of his friends. Nevertheless, Rheneas is always highly dedicated to the task at hand.

Rheneas is based on the Talyllyn Railway's Dolgoch, a Fletcher Jennings Class Bb 0-4-0WT. In the Railway Series, Dolgoch is Rheneas' twin. Jennings is another member of this class. 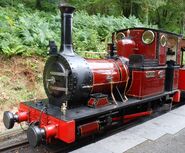 Rheneas is painted in the Skarloey Railway (SR)'s standard red livery with blue lining and black wheels. His name is written on his boiler in yellow, while his number (2) is placed on his bunker in black-backed brass plates. He has a brass dome, black running board and red bufferbeams.

"I tried hard, but I couldn't do much".
"Its my turn now, you've done more than your share of hard work".

"The Thin Controller is relying on me! If I fail the railway will close! It mustn't, it mustn't. I'll get there or burst!"
"...I've got there at last!"

Skarloey Railway
*Disclosure: Some of the links above are affiliate links, meaning, at no additional cost to you, Fandom will earn a commission if you click through and make a purchase. Community content is available under CC-BY-SA unless otherwise noted.
Advertisement