Henry goes to the quarry to collect stone trucks and, en route, hears Toby's bell and whistles to him, but does not receive a reply. At the quarry, Henry finds that Mavis is very cross and does not seem to care about Toby's whereabouts. She even refuses any help from Henry, so Henry collects his stone trucks and leaves Mavis alone.

The next day, Edward hears Toby's bell on his way to the quarry, but, like Henry, he too does not get a reply. At the quarry, Mavis still refuses any assistance from other engines despite being in a mess with the trucks. Edward leaves the quarry whilst Mavis accidentally bumps some trucks so hard that they break apart, spilling stone all over the track.

That afternoon, Thomas is waiting for his stone trucks from Mavis, but they never arrive. Suggesting that there must be trouble at the quarry, the Fat Controller goes there with Thomas. However, they hear a bell and the Fat Controller tells Thomas to stop so that he can check up on Toby. He is quick to realise that it is not Toby; it is a cow wearing a bell around her neck. 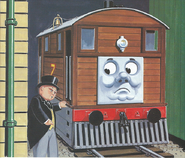 Add a photo to this gallery
Retrieved from "https://ttte.fandom.com/wiki/Rings_a_Bell!?oldid=1714229"
*Disclosure: Some of the links above are affiliate links, meaning, at no additional cost to you, Fandom will earn a commission if you click through and make a purchase. Community content is available under CC-BY-SA unless otherwise noted.