The River Els is the river where Thomas went fishing. The river begins near Ulfstead Castle, before flowing down to meet the River Callan. The nearby town of Elsbridge is named for the bridge that spans the river. From there, the river carries on, running parallel to Thomas' Branch Line until it meets the sea at Knapford Harbour, where two bridges span the river. A canal boat has been seen floating down it. In the television series, The Loop Line crosses the river on a bridge near Elsbridge.

It only appeared in a few Railway Series stories, the first series and one episode of the fourth series.

The road bridge over the river in the Railway Series

The river on Knapford Harbour

Thomas' driver and fireman getting water from the river

Bulstrode on the river

The Sodor Trading Co. behind the river and Bulstrode

The trucks before falling on Bulstrode 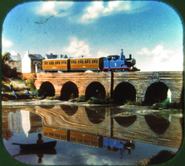 Español עברית Polski Русский
*Disclosure: Some of the links above are affiliate links, meaning, at no additional cost to you, Fandom will earn a commission if you click through and make a purchase. Community content is available under CC-BY-SA unless otherwise noted.
Advertisement