Robert Hartshorne (born 10 June 1956 in London, England, UK) is a British composer and singer who took over as composer for Thomas & Friends after the retirement of Mike O'Donnell and Junior Campbell.

He has composed music for every episode of every series from the seventh series to the nineteenth series, including Jack and the Sodor Construction Company, as well as recomposing six episodes of the sixth series and composing music for every special from 2005 to 2015, excluding The Adventure Begins. From Day of the Diesels on, his son Peter helped compose the music for the specials with him. He also took over composing the songs following Ed Welch's departure.

He was also commissioned to write a song called "Stronger As One" in honour of Queen Elizabeth II's Diamond Jubilee, sung by Laura Wright.

Robert and his son Peter also often work on the music for various Andrew Marr documentaries, including the recently released documentary series, "Andrew Marr's History of the World".

He has also composed a song for one of HiT Entertainment's other brands, "Fireman Sam".

After Sodor's Legend of the Lost Treasure, Robert and Peter's contracts with HiT Entertainment had ended and the executives wanted to use someone new. Chris Renshaw took their place as the main composer from Bubbling Boilers onwards, while Oliver Davis took over composing the songs. 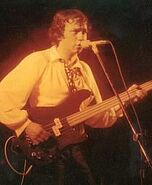 Hartshorne playing in a university band

Robert with his son, Peter

Peter and Robert in 2017
Add a photo to this gallery
Retrieved from "https://ttte.fandom.com/wiki/Robert_Hartshorne?oldid=1670586"
*Disclosure: Some of the links above are affiliate links, meaning, at no additional cost to you, Fandom will earn a commission if you click through and make a purchase. Community content is available under CC-BY-SA unless otherwise noted.